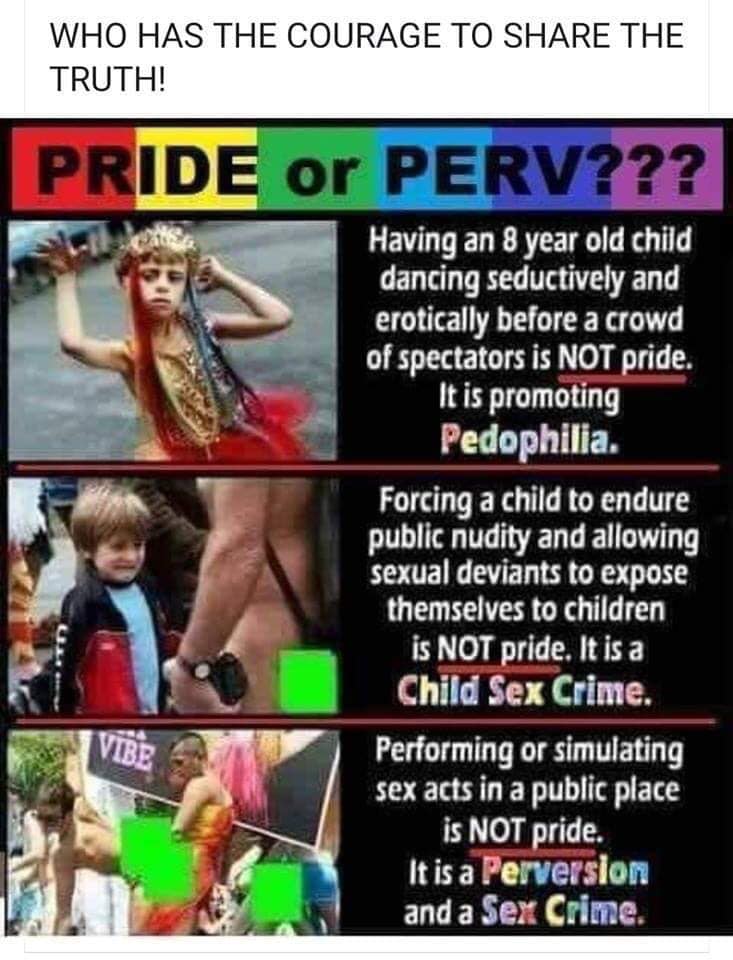 So yesterday morning one of my friends shared this!!!! So, I copied it to my page, and instantly got a message from fb community standards that it went against their NUDE policy??  Hence the rant yesterday!!!! So, imagine my complete and utter disgust this morning when I came across this photo on fb: 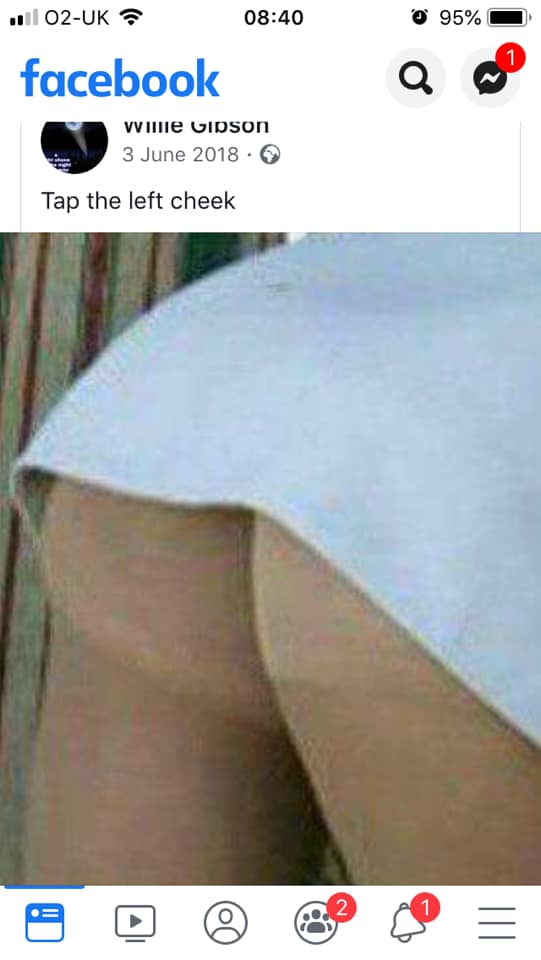 Where is your community fuckin standards this morning fb???????

So, you can see where I AM going with this people.  It’s ok to show women naked but God forbid you should show a very hard hitting TRUTHFUL, FACTFUL image of demons sexualising children???????

My feeling on it is that the little demon who was policing fb yesterday is most definitely GAY!!!! And we should all know by now that it’s ok for them to have their misguided beliefs, but we can’t have freedom of speech or freedom to share the TRUTH!!!!!!!

Also, if we look at what the Bible has to say about being gay and more to the point about leading children astray, it is very clear on these subjects!!!!!!!

Thou shalt not lie with mankind, as with womankind: it is abomination.

If a man also lie with mankind, as he lieth with a woman, both of them have committed an abomination: they shall surely be put to death; their blood shall be upon them.

For this cause God gave them up unto vile affections: for even their women did change the natural use into that which is against nature:

27 And likewise also the men, leaving the natural use of the woman, burned in their lust one toward another; men with men working that which is unseemly, and receiving in themselves that recompence of their error which was meet.

28 And even as they did not like to retain God in their knowledge, God gave them over to a reprobate mind, to do those things which are not convenient;

Even as Sodom and Gomorrha, and the cities about them in like manner, giving themselves over to fornication, and going after strange flesh, are set forth for an example, suffering the vengeance of eternal fire.

But we know that the law is good, if a man use it lawfully;

9 Knowing this, that the law is not made for a righteous man, but for the lawless and disobedient, for the ungodly and for sinners, for unholy and profane, for murderers of fathers and murderers of mothers, for manslayers,

10 For whoremongers, for them that defile themselves with mankind, for menstealers, for liars, for perjured persons, and if there be any other thing that is contrary to sound doctrine;

And he brake down the houses of the sodomites, that were by the house of the Lord, where the women wove hangings for the grove.

Know ye not that the unrighteous shall not inherit the kingdom of God? Be not deceived: neither fornicators, nor idolaters, nor adulterers, nor effeminate, nor abusers of themselves with mankind,

10 Nor thieves, nor covetous, nor drunkards, nor revilers, nor extortioners, shall inherit the kingdom of God.

Ok, so you get the picture.  There are loads more too.  Let’s look at the meaning of the word effeminate :

1 : having feminine qualities untypical of a man : not manly in appearance or manner

2 : marked by an unbecoming delicacy or over refinement

Having or showing qualities or characteristics more often associated with females than males; unmanly.

To grow womanish or weak; melt into weakness.

So why over the last few decades are we seeing such a rise is homosexuality?  Well there is the small matter of ATRAZINE getting used :

Atrazine is a herbicide of the triazine class. Atrazine is used to prevent pre- and postemergence broadleaf weeds in crops such as maize and sugarcane and on turf, such as golf courses and residential lawns. It is one of the most widely used herbicides in US and Australian agriculture. (Wikipedia)

Look how much shite we in the UK import from these countries, this is in everything!!

March 13, 2014- Hired by company that became Syngenta to do research on herbicide/pesticide called Atrazine. Dr. Tyrone Hayes’s research showed that the chemical caused frogs to develop sexual abnormalities, breeding problems and homosexual behaviour where male frogs only tried to mate with other males. Dr. Hayes said that Atrazine, which is used on up to 50% of corn crops as a pesticide, can possibly have the same effect on humans which was later confirmed in later independent studies.

The company tried to buy Dr. Hayes in order to gain control of the data and when he refused to sell out, they set about a vicious campaign to silence the doctor and discredit his work. Dr. Hayes says that company representatives threatened him and his family with violence and Hayes is married with children, was personally threatened with homosexual violence and lynching.

The company paid other scientist to dispute Dr. Hayes’s findings publicly and he alleges that people stalked him and interfered with his speaking engagements. Dr. Hayes says he is also disappointed that the University of California, Berkeley did not defend him and seemed unconcerned about his safety. All of his allegations were confirmed when a lawsuit forced internal company documents to light.

Not to mention all the famous illuminati puppets normalising it to push the agenda, films, tv, music, kid’s cartoons, kid’s films, magazines, newspapers even games!!!!!!!  Do I need to say more???????

Except PRAY for each and everyone of them, that they come to REPENTANCE and find the peace they deserve!!!!!!!

Now to tackle the leading astray of children :

And whoso shall receive one such little child in my name receiveth me.

6 But whoso shall offend one of these little ones which believe in me, it were better for him that a millstone were hanged about his neck, and that he were drowned in the depth of the sea.

7 Woe unto the world because of offences! for it must needs be that offences come; but woe to that man by whom the offence cometh!

8 Wherefore if thy hand or thy foot offend thee, cut them off, and cast them from thee: it is better for thee to enter into life halt or maimed, rather than having two hands or two feet to be cast into everlasting fire.

9 And if thine eye offend thee, pluck it out, and cast it from thee: it is better for thee to enter into life with one eye, rather than having two eyes to be cast into hell fire.

It were better for him that a millstone were hanged about his neck, and he cast into the sea, than that he should offend one of these little ones.

Demons are all around us WE need to be vigilant and keep our children safe people!!!!!!!

View all posts by worriedmum1